A BRIEF HISTORY OF THE ARCHENHOLD OBSERVATORY IN SECTIONS 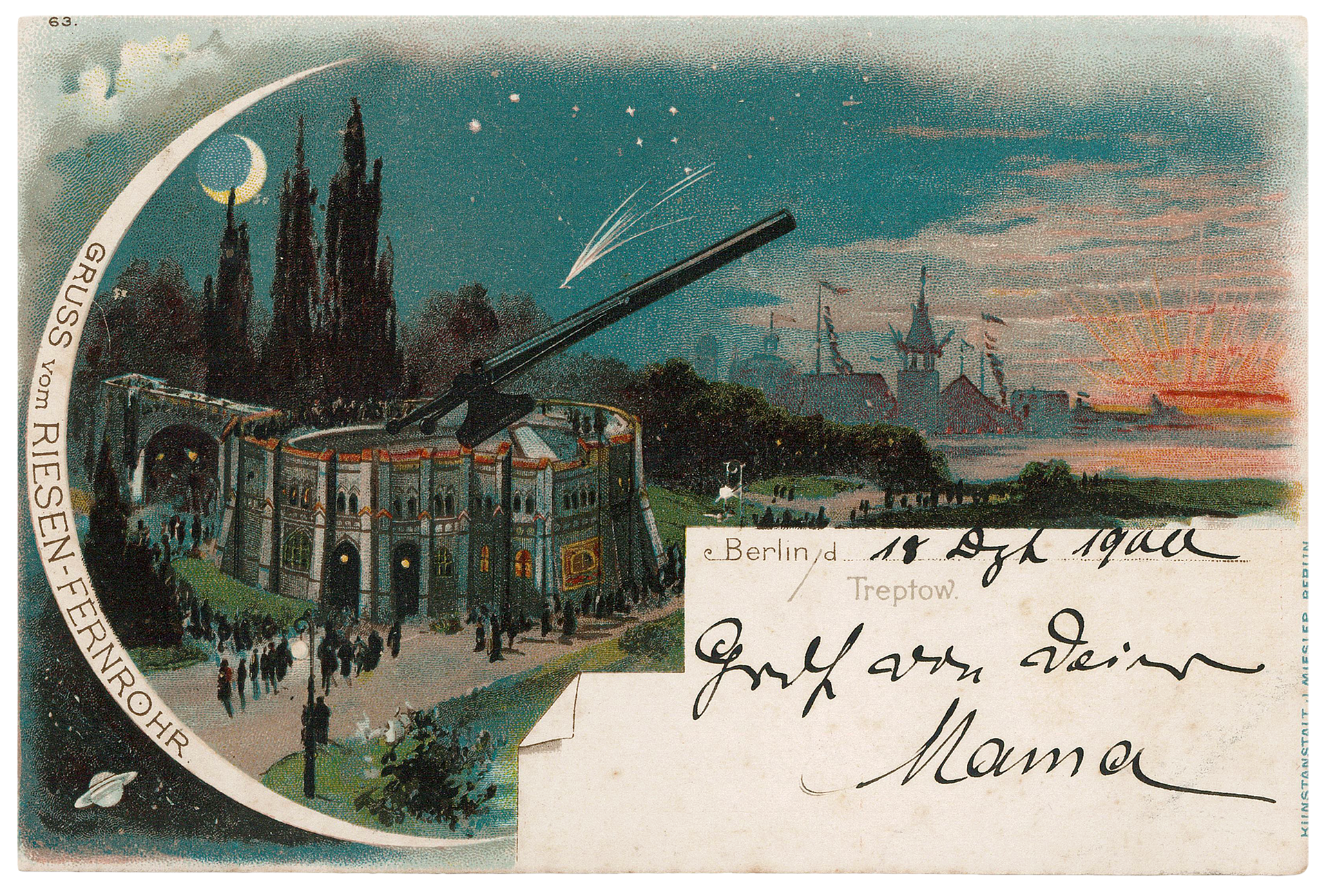 Postcard of the Berliner Gewerbeausstellung (Berlin Industrial Exhibition), 1896
Archive of the Archenhold Observatory

“The nebula I photographed first appeared on October 27, due of the provisional set-up of the apparatus, as an extremely faint spot on two plates exposed 32 times at 30°. These were the first photographs taken at Halensee—they did not yet produce exact images of the stars.” Quoted from: Astronomische Nachrichten, Issue 129, 1891 [previously unpublished translation]

Archenhold is able to photograph the so-called California Nebula in the Perseus constellation. This event becomes an initial spark to motivate him to have an as-yet unparalleled observatory and telescope built in Berlin, in a climate of social progress and industrialization. 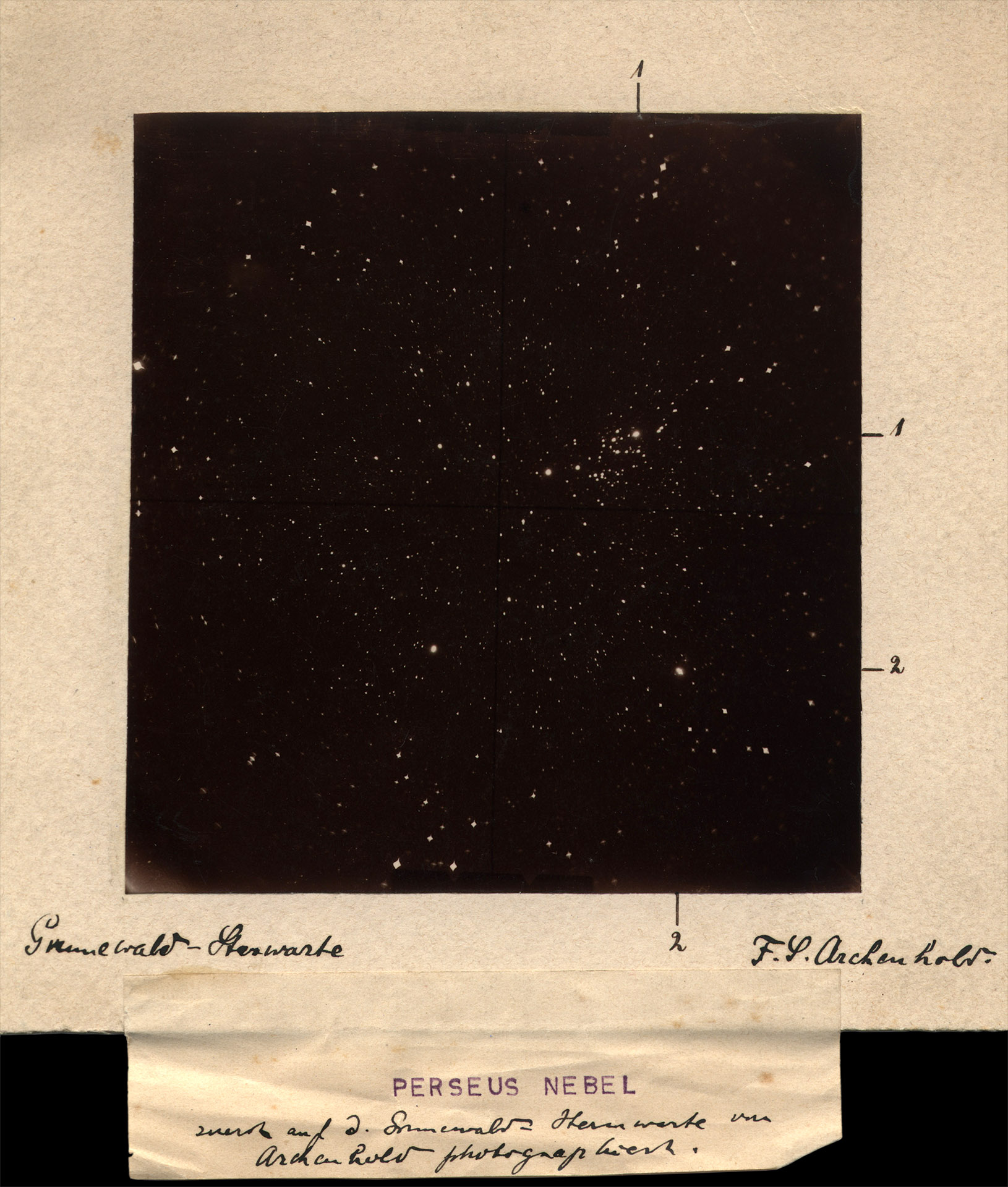 The then-largest refracting telescope in the world is born, supported primarily by private donors. Archenhold is able to commission the Berlin company Ernst Karl Theodor Hoppe to construct this giant telescope. The model for the Berlin “sky cannon” without a movable observation platform is innovative, and its designer Friedrich Meyer states:

Hoppe “had the audacity to mount a telescope of 21m focal length in such a way that the eyepiece was located at the intersection of the hour angle and the declination, and the giant-length tube could be moved around the eyepiece as a pivot.” Quoted from: Zeitschrift für Instrumentenkunde 50, 1930 [previously unpublished translation] 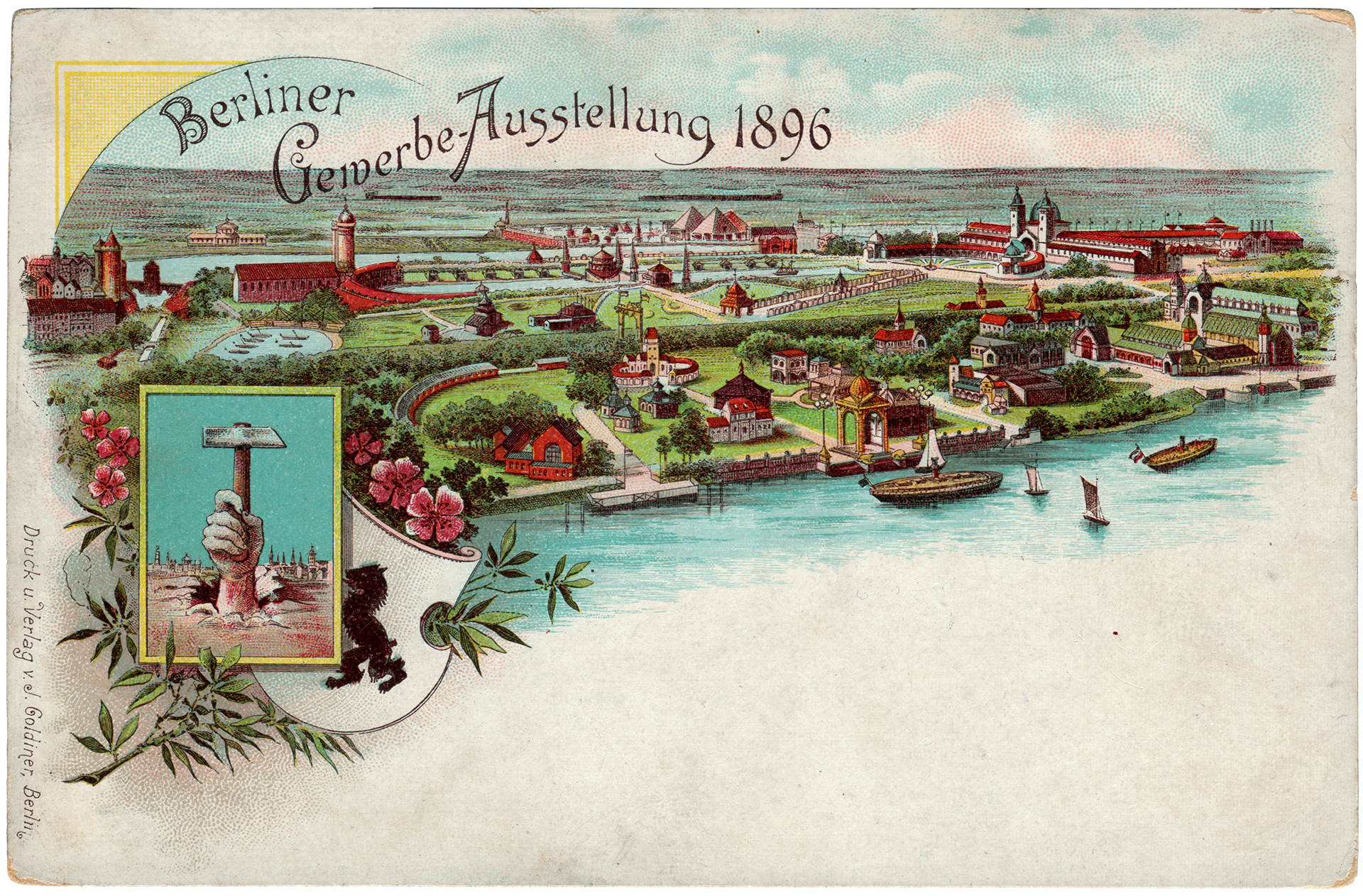 The Great Industrial Exposition of Berlin opens in Treptower Park and is meant to be the occasion to put the Great Refractor into operation for the first time and in front of a large public. 3,780 Berlin businesses exhibit in an exposition area of 900,000 square meters. The expo is divided into thematic areas such as “Old Berlin,” an “Alpine Panorama” and “Cairo” to serve as a backdrop and offer entertainment and gastronomy. At the same time, the “First German Colonial Exhibition” takes place. Kaiser Wilhelm II shows off the Navy of the German Empire with naval spectacles taking place on a manmade lake opposite the site of the Great Refractor. At the opening ceremony of the trade exhibition, a Berlin evening paper loyal to the Kaiser states:

“Cannon shots thunder from the steamer ‘Bremen’. They announce the approach of the imperial steamer ‘Alexandria’. The Kaiser’s music corps plays ‘Heil Dir im Siegerkranz’. And the roaring ‘hurrah’ of the crowds resounds in the face of the mighty passing ships. The spectacle is wonderful. A sea of flags in the shining sunshine, as far as the eye can see.”

The opening of the Great Refractor is delayed until June 20, 1896, nevertheless the telescope becomes a success with the public. Economically, however, it is a flop, as is the entire Great Industrial Exposition of Berlin. Archenhold is therefore unable to dismantle the instrument as contractually required, and the telescope remains in Treptower Park until further notice. 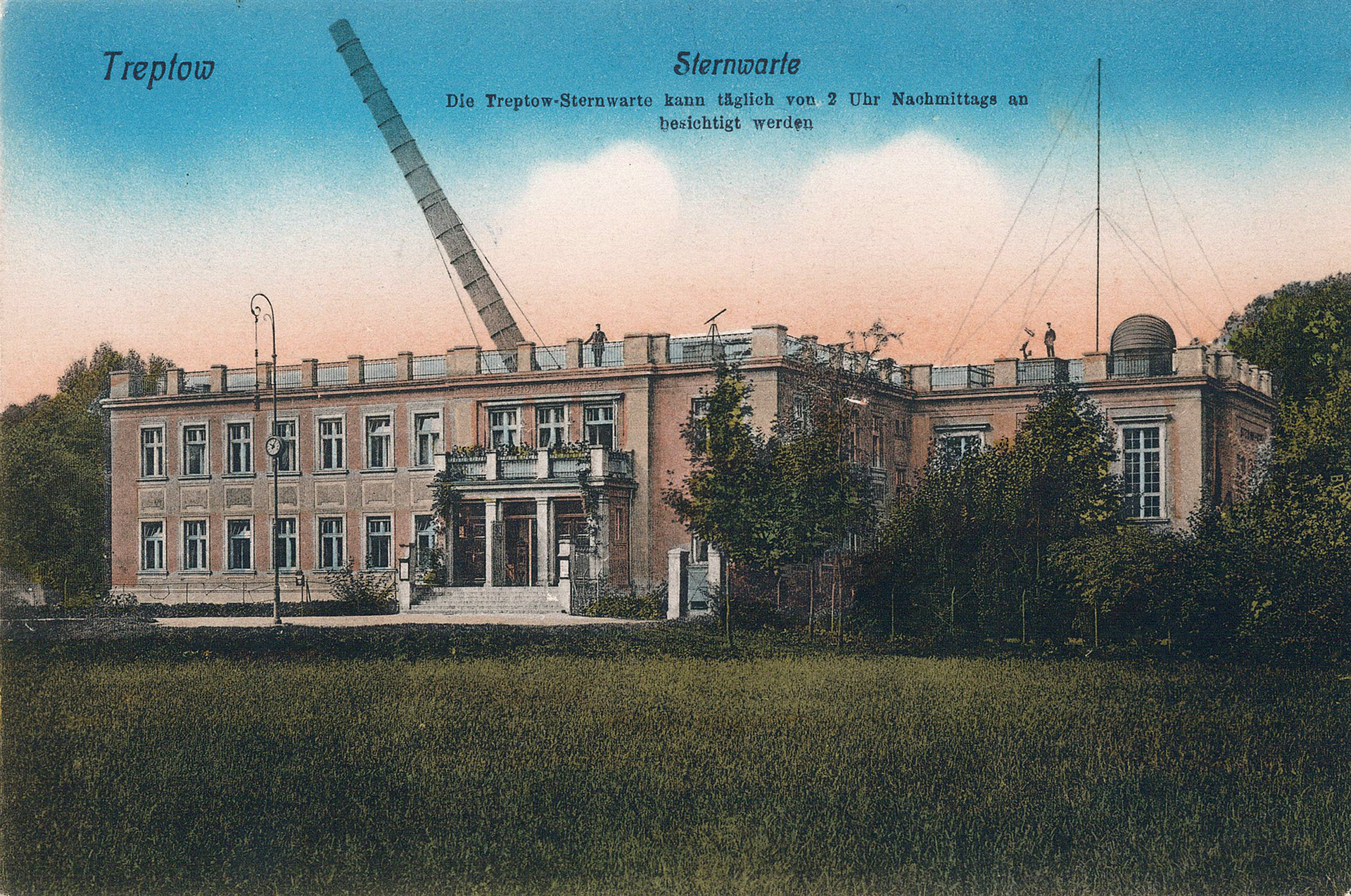 Postcard 1918
Archive of the Archenhold Observatory

Almost thirteen years after its commissioning, the provisional wooden architecture around the telescope is replaced by a permanent building. Equipped with a new library, lecture and exhibition halls, the “Treptow Observatory” enters the “service of public education.” The first director is Friedrich Simon Archenhold. For the inauguration of the building, 600 guests appear and Archenhold writes:

“Our epoch of obstacles is admittedly overcome, now the period of difficulties begins. (…) In my opinion, a fruitful popularization of our science can and must only be based on independent scientific research, which alone guarantees that the ever new problems of science can also be grasped with the right caution and depth”. 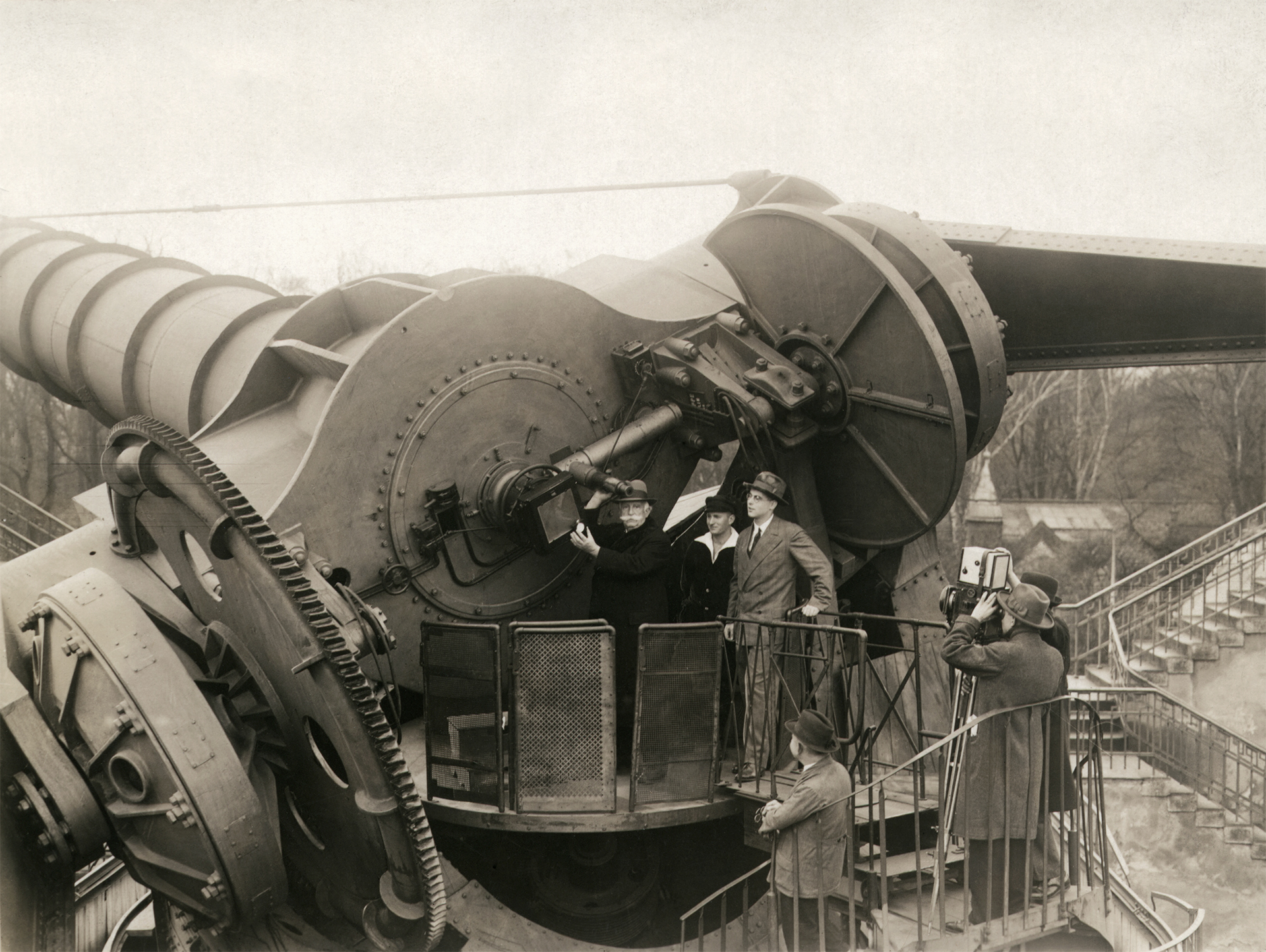 Albert Einstein gives his first public lecture on general relativity in Berlin at the Treptow Observatory. Before 1933, Archenhold will publish 30 more articles on Einstein’s theory and its consequences for science in the journal “Das Weltall.” His commitment to Einstein is part of his fundamental effort as director of the observatory to disseminate scientific knowledge to the general public.

Friedrich Simon Archenhold turns 70 and resigns as director of the Treptow Observatory. His son Günter Archenhold takes over.

The National Socialists remove Günter Archenhold as director of the Treptow Observatory. They deny the Archenhold family any access to the observatory because of their Jewish descent, and from then on they are no longer allowed to publish the journal “Das Weltall.” Friedrich Simon Archenhold writes to a former employee in 1937:

“It will be difficult, very difficult, for me not to be allowed to edit the journal I founded many years ago at personal sacrifice. Alas, I do not even receive an advance copy, although I have always covered the deficit of the ‘Weltall’ even through personal means. In the monthly planetary atlas, which I personally invented, my name is scratched out on the original publication template. Nothing shall remain of the earlier epochs.” 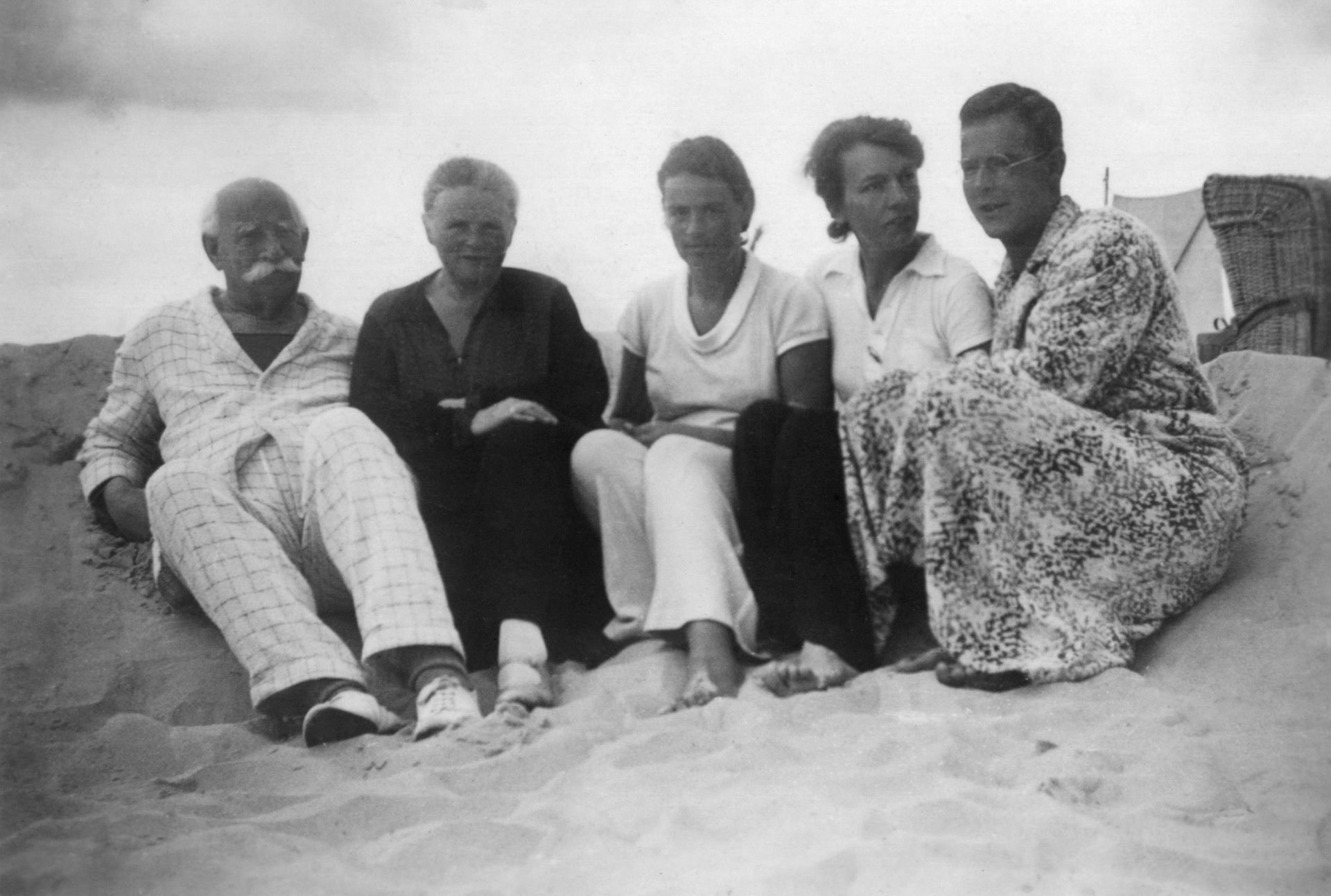 After World War II, the Great Refractor is operational again despite war damage and a first public observation of a solar eclipse takes place.

By decision of the Berlin Magistrate, the Treptow Observatory is renamed “Archenhold Observatory Berlin-Treptow” in memory of its founder.

During a congress at the Archenhold Observatory, 102 representatives from observatories, adult education centers and scientific newspapers formulate the task of public observatories in a post-war Germany as, among other things, “cultivation of a wholistic worldview and a promotion of semi-professional work, which are to be merged into a harmonious whole” (quoted from the speech of the provisional director of the Archenhold Observatory, Edgar Mädlow). This definition remains decisive for the next decades, despite the political division of Germany from 1949 on.

The launch of Sputnik heralds the cosmic age:

“On this day, October 4, 1957, when the first Sputnik orbited our Earth and millions of people stood still in the streets, to spy the artificial Soviet moon of the Earth, it very soon became clear that the Soviet Union had pushed open a gate to a new stage of scientific and technological revolution.”

In 1959, the GDR government introduces astronomy as a compulsory subject at higher levels of high school, and public observatories take on an even more important role as educational institutions. In the same year, the Archenhold Observatory receives a small planetarium from the Zeiss company, which can project 3,000 stars onto an artificial celestial dome. A Zeiss-Coudé refractor, a Zeiss-Cassegrain reflecting telescope and a solar physics cabinet follow later. The Great Refractor, on the other hand, has been decommissioned since 1958. 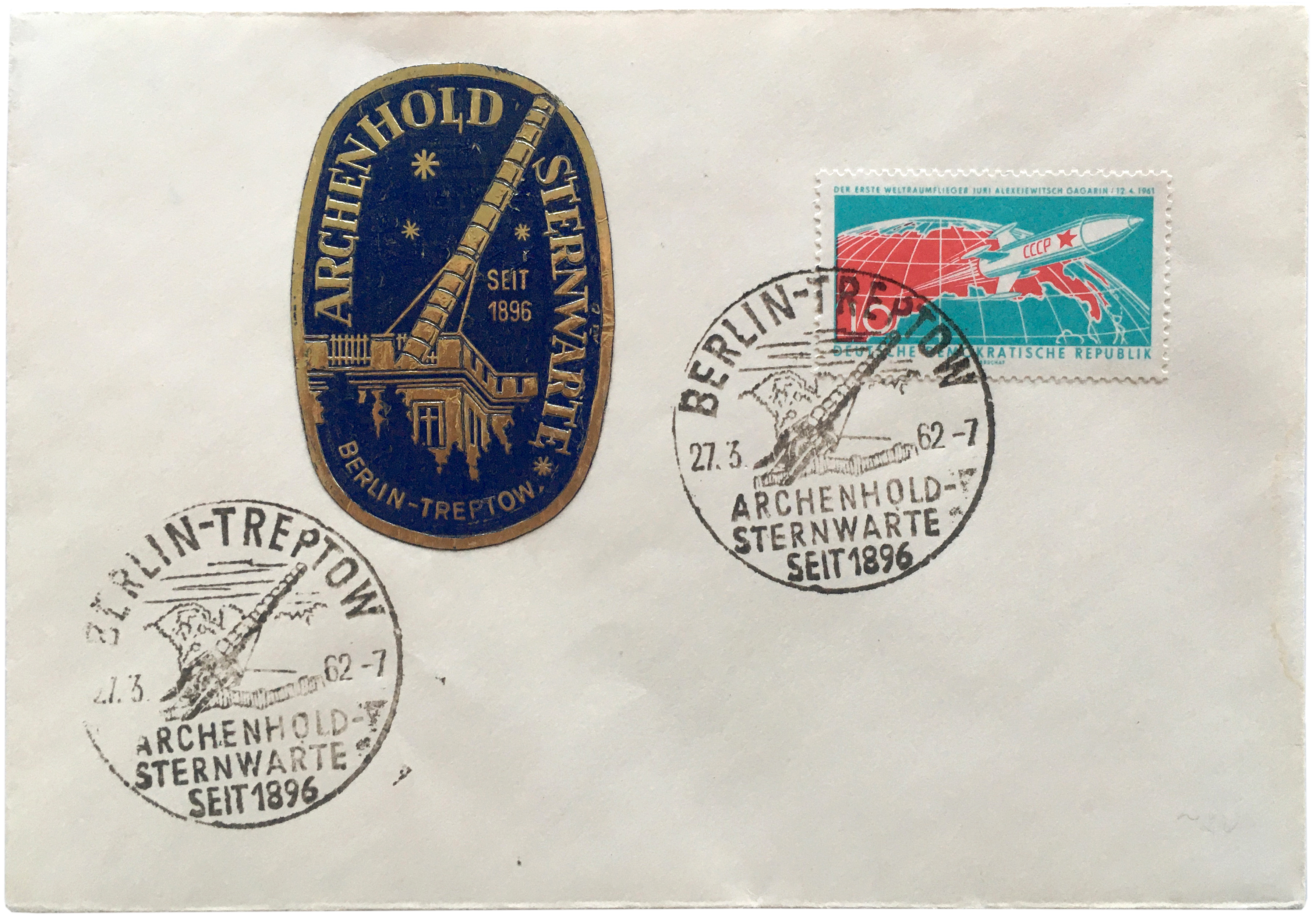 Cosmonaut Sigmund Jähn and Commander Valery Fyodorovich Bykovsky receive a hearty reception in East Berlin. Hundreds of thousands greet the space travelers as they ride through the city in an open top car. Arriving at the Archenhold Observatory, the “Grove of the Cosmonauts” is inaugurated in their presence and a bronze bust of Jähn by the sculptor Gerhard Rommel is unveiled.

After lying idle for 25 years, the Great Refractor is used again in public for the first time for a lunar observation. The giant telescope, which is now a listed building, had previously undergone a six-year general overhaul. 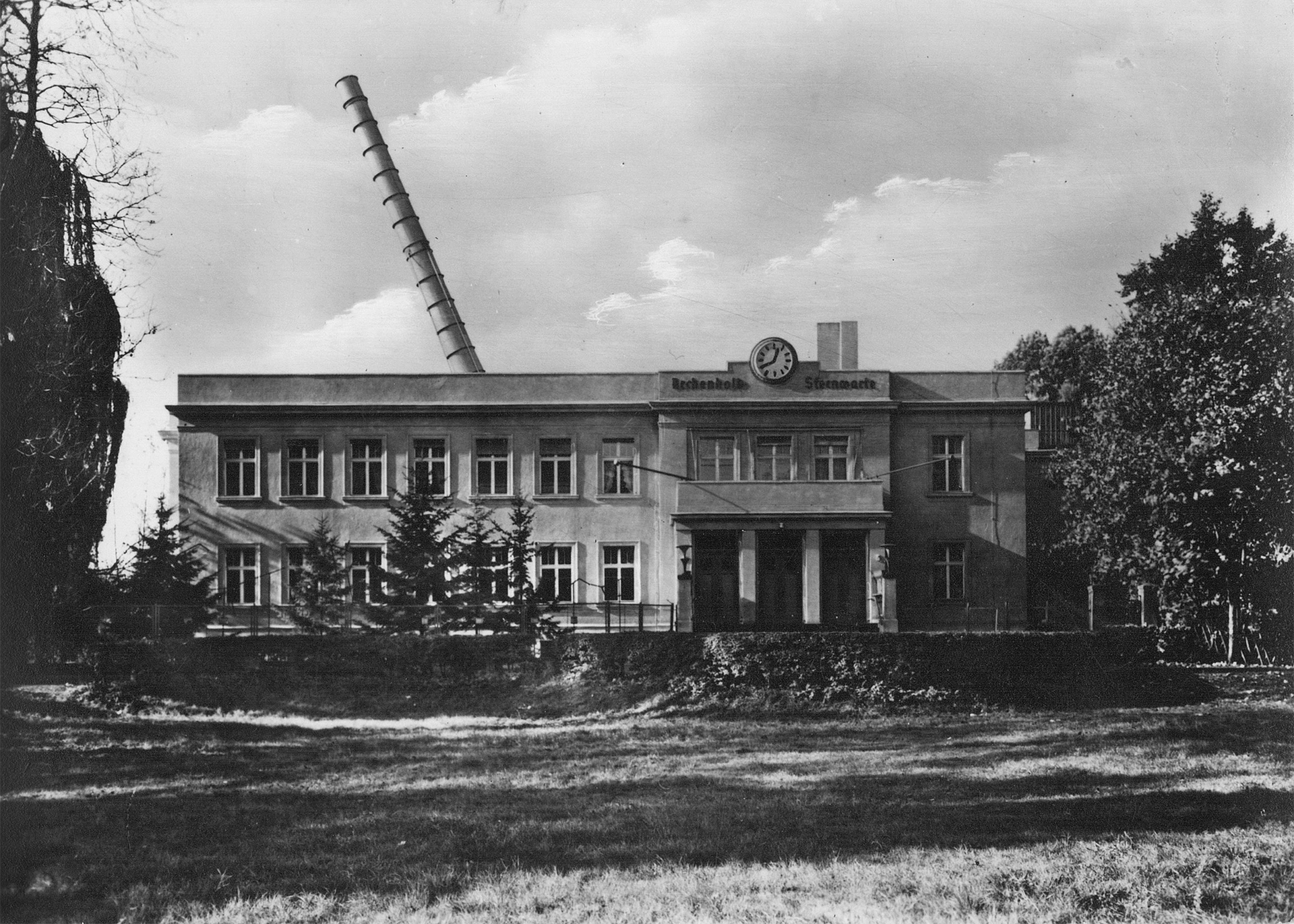 Postcard 1960
Archive of the Archenhold Observatory

Shortly after reunification, the state government of Berlin decides to privatize the Archenhold Observatory and the Zeiss Planetarium in East Berlin. An independent sponsor is to take over the financing of the operation. The director at the time, Dieter B. Herrmann:

“In technical jargon, the observatory was said to be ‘unfurled’ with the aim of privatization. Within the shortest possible time the enterprise had to be re-structured and new personnel hired(…) This drastic personnel reduction from 80 workers to 28 for both houses was connected with innumerable discussions and numerous personal hardships for many.(…) additional to the downscaling, the existing public shrunk extensively: School groups, which came in the context of the obligatory astronomy classes, ‘brigade groups’ from large enterprises, participants in youth clubs and other ‘socially organized’ visitors disappeared completely.”

Shortly after the state government’s decision, the non-profit “Förderverein der Archenhold-Sternwarte und des Zeiss-Großplanetarium Berlin e.V.” is founded, which continues to provide significant support for the work of the Archenhold Observatory to this day.

1,000 guests attend the 100th anniversary of the Archenhold Observatory and also point to a renewed increase in the number of visitors. Fred Archenhold from Leeds, son of the director Günter Archenhold who was expelled by the National Socialists, gives a ceremonial speech. His 92-year-old father sends greetings from England via video.